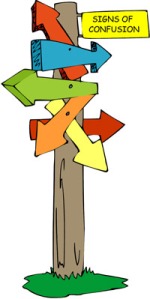 Dyslexics often confuse their left from their right hand and which way is left and right.  It can drive a parent or teacher of a dyslexic student batty trying to help them figure it out.  Adult dyslexics are embarrassed and frustrated because not knowing which is which can be annoying at best and a disaster at worst.  Imagine being given a set of directions using left and right and not knowing which way to turn.  Where are you?  You’re lost at the start and you don’t have a clue how to get there!  Even if you are given street names and you can read them you still don’t know which way to go.

So today’s blog is going to be a simple trick to help the dyslexic people in your life remember their left from their right.

Take your hands and hold them straight out in front of you with your thumbs extended straight out.  I have provided an illustration below.  The hand that forms a capital “L” with the thumb is their left hand, their left side, the direction to go if you are turning or going to the left, etc.   The other hand therefore, has to be your right! Nice thing about your hands is, they are always with you.

Note: when you are showing this trick to someone who is having difficulty with right and left – have them put their hands on a piece of paper, hold the position below and then use a colored crayon, felt pen, etc. and draw the “L” shape. I had a recent Dyslexic tell me they never got this idea until someone drew the “L” on the inside of her extended thumb and finger.

Letters are an abstract that is hard for Dyslexics to understand or connect with in any situation so without drawing the letter on the inside of the thumb and finger, our Dyslexic friend only saw an extended finger and thumb, no “L”. People kept showing her this visual until someone finally drew the letter for her inside her hand. She said before she got this important clarification, she would nod her head in agreement but had no clue what they were talking about.

Another help to make this trick work for a Dyslexic – make sure the hand that is being used to trace the “L” is theirs! This exercise becomes kinesthetic for them so they “feel” what you are saying and relating the “L” to their body. Otherwise when they are trying to remember this “L” shape they might be thinking about the hand of the person who showed them.  Then they are back to visualizing the other person and what position they are in when holding the “L” shape in their hand; beside the Dyslexic or sitting across from them! 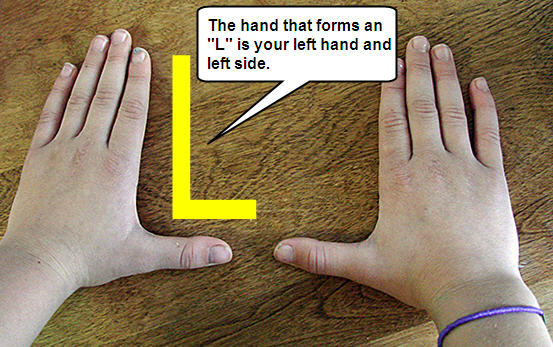 Another tip for dyslexics learning about right and left.   Trying to understand their own left and right is confusing but knowing  and understanding that another person’s  right and left will be opposite yours if they are facing you can be a nightmare for a dyslexic.  Standing beside you facing the same direction  as you are can also be hard to comprehend.  Why?  Well, if your right hand is by their left hand then they could potentially think your right hand is a left one because it is on their left side.

Recently we were having a family dinner and one young fellow named Mike was talking about a problem he was having with an employee  he supervised.

Mike works as a surveyor and uses a piece of equipment called an EDM (Electronic Distance Measuring Device).  The purpose of this tool is to measure distance when confirming property lines and markers.  He stands at one end with the EDM which is the control point and his assistant stands at the other end with a range pole facing Mike.   As Mike lines up the EDM on the range pole he will tell the person holding the pole to move to the left or right by a certain measurement.

Now for most people they would be able to establish and agree on whether to move to their right or left or the other person’s right or left.  In the case of Mike’s helper, he could not figure this out.  Mike kept trying to get him to agree to whose right or left but couldn’t find a way to help him understand.  Mike was really frustrated thinking  that his assistant was playing mind games with him by being deliberately stupid.  He knew the fellow was intelligent enough and the issue was a relatively easy one to Mike so he couldn’t understand what the problem was.

Mike told us some other problems he was having with him and it was pretty clear that he was dealing with someone with dyslexic issues.  I made some suggestions such as the trick with the “L” in our hands and I don’t think he believed me.  A few weeks later we were at dinner with Mike again and asked him how it was going.  Apparently he thought about what we talked about and Mike and his employers started to work at finding ways to work with this dyslexic individual.   As a result he was doing much better at his job and everybody was happier.

So my point is;  if you are working with someone or you are the someone with direction problems, you need to realize that with some cooperation and problem solving you can sort this out and get on the “right” path.  I recommend when you are trying to work with a dyslexic and  using right or left in a project use the dyslexic’s right or left, not yours.  If they don’t understand how to tell right from left suggest the little trick with your hand I described above.  It might help and then you will both be less frustrated.

What do you think? Cancel reply

You can purchase books by us on our website: Dyslexia Victoria Bookstore

The books below are three of our best sellers. Click on the book and it will take you to an info and order page:
Dyslexia Victoria Online

Calender of our Blogs